National History–Historic AKA: An Overview

In 1908, Alpha Kappa Alpha Sorority, Inc. became America’s first Greek-letter organization established by Black college women. Her roots date back to Howard University, Washington, D.C., where the idea formation was conceived by Ethel Hedgeman Lyle of St. Louis, Missouri. She viewed the Sorority as an instrument for enriching the social and intellectual aspects of college life by providing mental stimulation through interaction with friends and associates. Through the years, however, the function of Alpha Kappa Alpha Sorority, Inc. has become more complex. After her incorporation as a perpetual body in 1913, Alpha Kappa Alpha Sorority, Inc. gradually branched out and became the channel through which selected college-trained women improved the socioeconomic conditions in their city, state, nation, and the world.

In a world in which materialism is pervasive, and technology and competition have decreased the need for collaboration and cooperation, it is critical to have an association that cuts across racial, international, physical, and social barriers to help individuals and communities develop and maintain constructive relationships with others. Alpha Kappa Alpha Sorority, Inc. is that vital organization.

Alpha Kappa Alpha Sorority, Inc. is a sisterhood composed of women who have consciously chosen this affiliation as a means of self-fulfillment through volunteer service. Alpha Kappa Alpha Sorority, Inc. cultivates and encourages high scholastic and ethical standards; promotes unity and friendship among college women; alleviates problems concerning girls and women; maintains a progressive interest in college life; and serves all mankind through a nucleus of more than 300,000 college-trained members in the United States, the Caribbean, Europe, and Africa.

Candidacy for membership into Alpha Kappa Alpha Sorority, Inc. is open to women of high ethical and scholastic standards who are pursuing or have completed courses leading to a degree at an accredited college or university. Our official headquarters is in Chicago, Illinois.

Nine Howard University students were led by Ethel Hedgeman Lyle into a sisterhood in 1908. Nellie Quander and her gallant group contributed the added dimension of a national organization and perpetual membership. Those who have come after them, the never-ending stream of eternally young, hopeful and enthusiastic women, must be remembered.

Through the years, as a member of the Mid-Atlantic Region, Beta Chi Omega has grown aplenty. The chapter has a membership of 70 and has charted three undergraduate chapter in the area: Tau Zeta – Washington and Lee University, Theta Phi – Virginia Polytechnic Institute and State University, and Theta Chi – Radford University. Beta Chi Omega Chapter readily serves the Roanoke Valley via our national programs, currently themed Exemplifying Excellence Through Sustainable Service under the leadership of Madam Supreme Basileus Glenda Baskin Glover, Ph.D, JD, CPA. We are committed to serving our community via the five national program targets: HBCU for Life: A Call to Action, Women’s Healthcare and Wellness, Building Your Economic Legacy, The Arts!, Global Impact, and the signature #CAP program along with local chapter initiatives that are being refreshed and new chapter initiatives that are being implemented. In 2018, Beta Chi Omega extended their service effort in the Roanoke Valley by creating Ivies Incorporated of the Roanoke Valley, their incorporated entity that serves as the philanthropic arm of the chapter.

Beta Chi Omega Chapter has been a vital part of the Roanoke Valley for 80 years. The Chapter looks forward to many more years of providing service through innovative programs in our community. 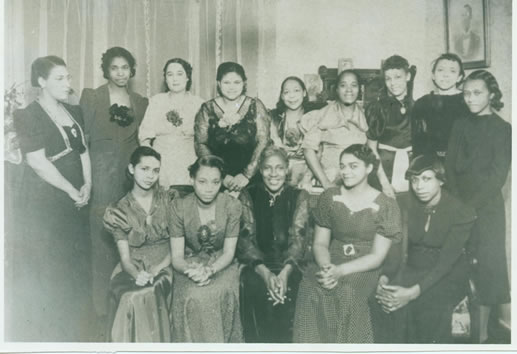 Chapter Members Who Have Held National Office: Members Eunice R. Poindexter*, served as Regional Director for the National Non-Partisan Council on Public Affairs, under the leadership of Norma Boyd a Founder.

Other Significant Facts about the Chapter or Individual Members:

Hosted in 1941 (May 9-11) the South Atlantic Regional Conference-theme “Seeking and Securing National Defense through Organization and Cooperation.”